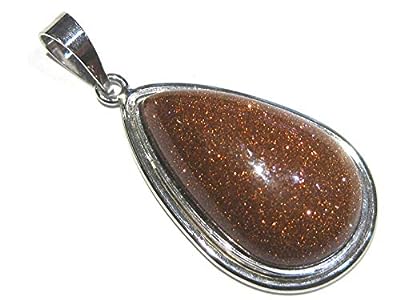 pendentif goldstone---------argent rhodié 925%--------------- artisanat made in italy-----------mm 40x19----------------There has been much discussion about this stone, how it was created, where it originated from, if it should be considered a gem or simply glass.... There are a few stories of alchemist monks attempting to make gold (some are French Monks, some Italian Monks) and in the process either a monk or a general worker accidentally knocked some copper shavings into a pot of molten glass...hence to variations of how it came about its name. Historically known as Aventurine Glass (From the Italian 'avventurina' meaning "accidental" which is derived from the root 'avventura' meaning "by chance, luck or risk", there are also French derivations as well. This story explains the trade names "Monk's Stone, Monkgold, Gold Flux as well as Goldstone". These versions of the story talk about the "recipe" being lost or forgotten until more modern times. Some of these stories evolved into this gem being falsely represented as a mineral that was a natural mineral secretly mined by monks.